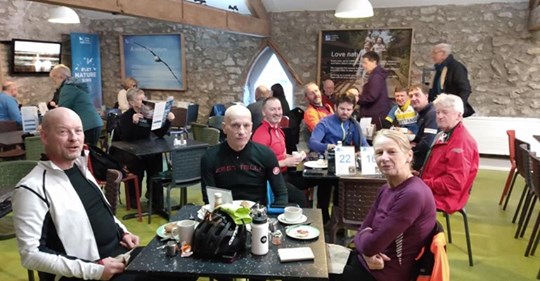 B1 - Silverdale - Chris Jones
Today we were joined by a couple of A group riders which meant 11 of us set off from the cobbles.
After some lumps and bumps at a good average pace of 14mph we arrived at the cafe stop, the RSPB in Silverdale which was pretty busy but eventually everyone got there food and we even saw the B2's before we left.
We then headed to Lancaster and I took us off route slightly to avoid a group of 11 making there way through the gridlocked one way system.
Unfortunately just after entering Lancaster Rick clattered into a bollard and went tumbling, initially all seemed well other than a sore shoulder and after collecting himself for a few minutes got up to walk around. All was obviously not well though as a couple of minutes later he collapsed and lost consciousness for a few moments. Ambulance was called which arrived a few minutes later at which point Rick didn't seem to bad just a little wobbly. Bike collection was arranged, Ian and Sim kindly waited behind for bike to be picked up whilst the rest of us made our way back to Garstang.
I then ride home to Morecambe, ended up being a long day and was out for more than 8 hours in total.