Kendal Sprint Triathlon Report: I was horrified to discover that my abysmal predicted swim time meant that I was in the very first wave at 8am, which meant a 5.30am start for me and my poor mum who volunteered as support and cheerleader. Luckily the other ladies were super friendly and we made awkward, semi naked, conversation in front of a packed gallery while we awaited the go ahead and first whistle. When it came, it was obvious that everyone else had lied about their swim time, and that I was the worst swimmer Cumbria and Lancashire had ever seen (bar 2). Transition one was mercifully short and simple, and I ran Bob (a borrow from Mr Paul Whaley??) up to the mounting area. It then turned out that I'm actually nae too bad at cycling, and overtook all the freestyling swimmers to the point where only one eluded me by transition 2. The photographer alas missed my grin by about a second (yes that is All Muscle on the legs) but I felt pretty good as I went into the run, except they appeared to be made from a fluid substance. The final run had a rather dishonest hill ("slight rise", my arse) but I persevered and made it back in a total time of 1hr 34m - only 4 minutes off my goal. Final position 159/189 and 6th in my ladies age category. Next stop: PETTS! 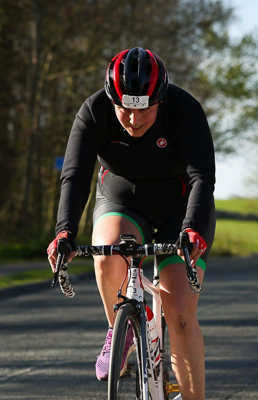