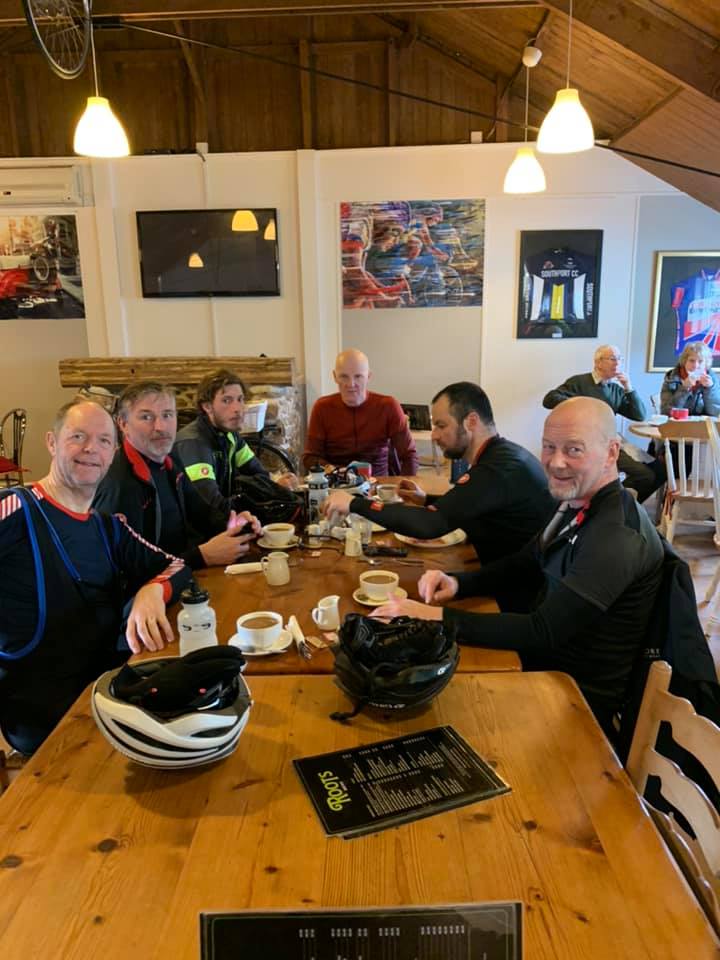 A Ride - Rick Wiggans
Plans were laid. Pedro published plans for yet another madcap escapade. Sounds great I thought. Wait I thought!! I’ve been coughing up buckets of phlegm for a week, and sweating buckets. Shall I go? Or shall I do something else, and live? Having a number of fairly important entries in my diary, some of which cost money, I decided to turn down Pedro’s generous offer of death. An exchange of posts with Paul Whaley suggested he felt the same, so the SaW ride was born. (Snot and Wimps). Having agreed to meet as usual on the cobbles, we were joined by a surprising number of riders who were either ill, recently ill, about to become ill, or just short of time. So, self, Keith Oglesby, Ian Tunbridge, Michael Birchall, Adam Kippax, Paul Baillie Steve Kelly and the aforesaid Paul Whaley set off south into a brutal headwind. Unfortunately, the moderate pace combined with the vicious head wind saw Paul Whaley’s heart rate spike to 3 million BPM, so rather than embarrass himself and cause your scribe endless paperwork, he gallantly turned for home rather than die in a ditch. Lots of lanes, loops and turns, some planned, some not so planned, saw the intrepid team arrive at Roots. Here, a variety of meals were ordered. The exchange rate of toast to tomato was established, as was the “Paul Baillie I hate people who sit next to me and order hash browns” index. Midway tucking into our feasts, we were joined by the Chuckle Brothers and their minder. Jollities exchanged, we left them to dive into their beans or whatever, and headed off. For once, the wind continued its relentless battering, but now as a tailwind. Good time was made to St Mick’s, and on towards the Skitham phone box. Here, the group split, some doing the loop around Cockers, others preferring/needing to head for home and a shower (not necessarily the same shower. At least not at the same time. Allegedly). So, for an A ride, it was quite SLOW, quite SHORT, quite SNOTTY, but as usual, quite SUPER.